You are here: Home / News / Rise of the API Economy

APIs become a primary customer interface for technology-driven products and services and a key channel for driving revenue and brand engagement.

One can think of the API Economy emerging initially as a series of strong individual ecosystems around valuable individual APIs — each of which has its own growing customer or partner user base.

There are some excellent API programs we can examine that can be examples for how all providers should design their programs (Twilio, Sendgrid, Stripe, NPR, Twitter, Facebook for example) and they have gone on to build huge audiences. As a result, all of these organizations have large and successful developer programs with a significant number of apps and services that use their APIs.

The ultimate objective of any API program is to garner a relevant group of developers that use the provider’s APIs.

Each API Program – whether tailored to the broader public, customers or close partners creates its own community of value, as illustrated below (Source ProgrammableWeb): 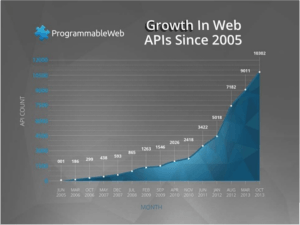 The other dynamic regulating the growth of the economy feedback loop are the dynamics occurring in the consumption of APIs and mashups of APIs from all sorts of organizations and independent groups and developers. Some of these dynamics are recognized in the following ways:

• Each of the APIs has its own user base,
• Each user of the API is deriving value from the APIs,
• Many API consumers use more than one API.

As this programmer asks, what about version control and search? Many organizations use Github to present their APIs to API consumers to address this.

Each API grows its own user-base over time but there are often overlaps in the mesh of APIs and certain API providers with together — for example Twilio, Sendgrid and a number of others often participate in hackathons together. There is also clear API consumer demand being expressed.

There are clear signs that this supply-demand loop is acting, accelerating, and at the same time causing acceleration of growth in the creation of API programs.

Further, there are also clear signs that while the API landscape is still a patchwork of ecosystems and technologies, there are structures emerging that are beginning to cut down the friction and create more connectivity. At the most fundamental level, there is clear cross-pollination between API programs:

APIs as a tactical means to support the business of an individual organization deliver value – in general both to the provider and the consumer. This, in and-of-itself makes them valuable to build.

Many of the structures that glue this economy together are still extremely nascent or not widely used, but the fact that they exist at all suggests there is increasing value in the feedback loop. It seems likely that both the number of individual APIs and these structures will all accelerate.

There was a time when a company’s market reach was limited to its direct sales organization, OEM and distributor channels and perhaps a website or two for online commerce. With the rise of the social web and an app-centric business and consumer cultures, virtually every developer is a target for your APIs and every application they create is a channel to reach new customers.

That is the promise of the API economy.