You are here: Home / News / The Death of Microsoft’s LinkedIn’s SlideShare

In 2016, SlideShare had over 70 million unique visitors per day, and it was listed by Alexa as one of the top 100 most visited websites in the world. At its peak, it was such a powerhouse that Obama used the network to post his birth certificate. It also stood for years as a premier B2B social channel: In 2015, author and marketing expert Jay Baer referred to it as “content marketing’s secret weapon.” 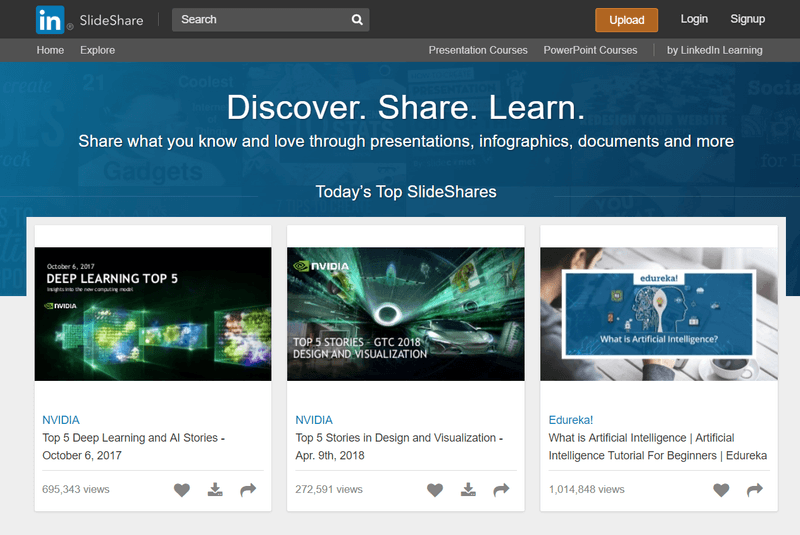 Power users have been dropping the SlideShare channel.
Despite SlideShare’s massive fan base, loyal users, and billions of impressions, a once-powerful channel is all but dead, and here’s why.
The Loss of Human Touch
The rapid growth of SlideShare from a small startup to a top website began in 2009, in a tiny room in India, when Amit Rajan, Rashmi Sinha, and Jonathan Boutelle saw the need for a “YouTube for presentations.” Within a few years, they had built a network of 38 million registered users by providing a desperately needed tool—and a new social channel for presentations.  But the key to their success wasn’t the tool, it was the human touch it added to the presentations.
SlideShare didn’t have a marketing team fueling its rapid growth. It relied on loyal fans. Its fans were the content creators, and to ensure the best content was featured, the team at SlideShare would manually curate the site each day, ensuring that the best presentations were prominently featured.
Some alternatives to SlideShare:
As we are continually bombarded with new marketing channels, tactics, and tools, one thing is clear: Slides are not going away. Events seem to give brands the personal touch the digital world just can’t, and slides are usually the No.1 content type at events.
The “YouTube of presentations” was at one point the number one destination for business owners and managers. It sported better demographics and site visitor loyalty than even LinkedIn. It was one of the top 100 most visited websites on the planet. Maybe that’s why LinkedIn bought it for $119 million in 2012, padding the nest eggs of serial investors and Slideshare backers Mark Cuban and Dave McClure, among others.
The 3 Biggest Slideshare Problems Today
Slideshare’s coming passing comes on the heels of the death of Squidoo and Scribd, among others.